The gradual warming of the Earth's surface will have impacts on water availability, ecosystems, food, coastal belts, and health.

What is the greenhouse effect?

The greenhouse effect is the process whereby certain gases, which are components of the planetary atmosphere, retain part of the energy released by the soil after the latter has been heated by solar radiation. These gases are called Greenhouse Gases (GHG).

There are many kinds of GHG besides CO2, such as methane (CH4), laughing gas (N2O), fluorinated synthetic industrial gases (CFC, HFC, PFC, SF6…) and ozone itself (O3). Although many of these gases are much more effective than CO2 in absorbing thermal radiation, carbon dioxide is the main culprit for global warming, as it is more abundant.

Greenhouse gases are necessary to maintain the Earth’s temperature at inhabitable levels (without them, the planet’s atmosphere would be about 33° colder…), but their excessive concentration causes a temperature increase on the planet which can affect life as we know it.

Every year, human activities produce more than 26,000 million tonnes of CO2, the most important greenhouse gas (GHG). This gas remains in the atmosphere for about a century before being absorbed by the oceans and terrestrial ecosystems. Given the long atmospheric life of this particular gas and the increase in human-generated CO2 emissions, the last two centuries have seen a gradual increase in CO2 concentration levels, causing a gradual heating of the Earth’s surface: climate change. In order to provide answers to some of the most puzzling questions about climate change, the IPCC (Intergovernmental Panel for Climate Change) was formed in 1988 by a group of experts from all countries. Its mission is to study and provide neutral data on the causes and consequences of climate change.

The organization issues a report approximately every 5 years, and it is important to note the evolution of scientific certainty as to the influence of human activities on global warming - which in their last report, released in 2014, is estimated to stand at 95%.

In the wake of the organization’s first report, the first global task force was created in 1992 to tackle climate change (the United Nations Framework Convention on Climate Change, UNFCCC), which meets every year for the so-called Conference of the Parties (COP). The COP’s most relevant results since 1992 include: 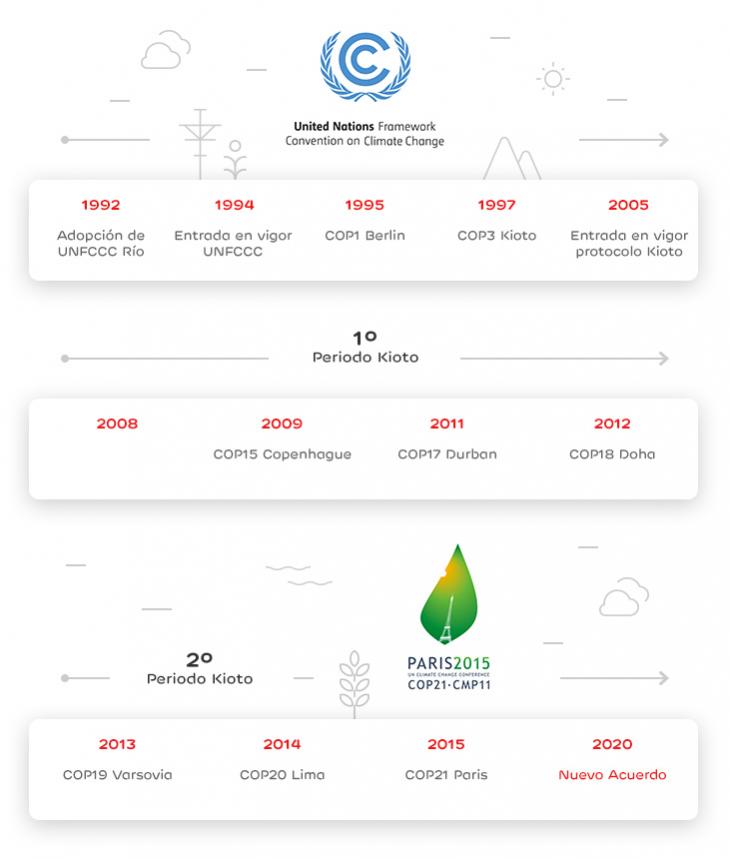 The Climate Summit in Paris has reached a historic agreement which, while not perfect, has achieved much more than anyone thought possible.

The negotiation of the International Agreement on Climate Change (Paris Agreement) took place in Paris from November 30 to December 12, 2015, when a consensus text, approved by all Parties, was finally reached.

The aim of the agreement is to strengthen the global response to the threat of climate change by establishing a concrete commitment to keep the rise in global average temperature well below 2°C, compared to pre-industrial levels, and to pursue efforts to limit the increase to 1.5°C.

The text consists of two sections: an Agreement with legal force, which includes the obligation to be transparent and to communicate the reduction target each party intends to achieve (these objectives are known as INDC - Intended Nationally Determined Contributions), and a non-binding Decision which details the technical aspects that should be achieved by 2020 in order to implement the agreement that year. In short, most procedural aspects are legally binding (these are included in the Agreement), while substantive elements, including specific INDC

goals, will not be legally binding (these are included in the Decision).

The agreement contains all the necessary elements to build a global strategy to combat climate change:

Mitigation: More than 190 countries, accounting for 95% of global GHG emissions, have submitted their national contributions (reduction goals). However, the overall balance of such reductions would lead to a temperature increase between 2.7ºC and 3.5ºC, which means that the success of the Paris Agreement depends on getting the Parties to widen the scope of their measures and thus limit the temperature increase to a target of 2° C/1.5° C.

Adaptation: One of the goals of the agreement is to enhance each country’s adaptive capacity and resilience (ability to overcome adversity), thereby reducing their vulnerability to climate change. Each country must periodically submit its Adaptation Plan, with the corresponding priorities and financial needs.

Funding: according to the agreement, developed countries have the legal obligation of providing financial aid to build infrastructure in developing countries, a necessary step to protect the population from the impact of climate change in the world’s most vulnerable countries. Developed countries have agreed to provide the financial aid they had committed to in 2009 (100 billion dollars per year from 2020 onwards).

Technology transfer: Technology transfer was an incentive for developing countries to take part in the first global agreement on climate change back in 1992. Richer countries agreed to promote, finance and transfer technology to developing countries, not only due to their greater contribution to the climate change predicament, but also because of their greater ability to cope with it. This topic, however, has been virtually dormant, and the new agreement reflects that by committing to create a method to streamline such transfer.

The agreement came into force on November 4, after being ratified by more than 55% of the parties, which in turn represent 55% of global GHG emissions.

As far as anthropogenic factors are concerned, the emission of gases containing chlorine and bromine (halogen source gases) is the cause for the depletion of the ozone layer. These gases accumulate in the lower atmosphere and are transported by wind and other air motions.

Once in the stratosphere, due to ultraviolet radiation, these gases quickly undergo chemical reactions and become reactive halogen gases - which, in turn, react with ozone and destroy it (depletion of the ozone layer). Over time, air in the stratosphere returns to the troposphere, bringing along reactive halogen gases which are then deposited on the Earth’s surface by rain and other precipitation. Some industrial processes and consumer products release halogenated substances containing chlorine and bromine atoms, which deplete the ozone layer. In turn, fluorine and iodine, although they are halogen atoms, either remain in chemical forms that do not destroy ozone (such as fluorine) or are, for the most part, eliminated in the atmosphere by natural processes and never reach the stratosphere.

Natural sources in the stratosphere

There is a connection between ozone depletion and climate change. The EDP Group recognizes the profound impact of climate change on the future of mankind, accepts the conclusions of scientific panels that point to the anthropogenic nature of global warming, and endorses the recommendations of the Intergovernmental Panel on Climate Change (IPCC), established by the United Nations, to limit global warming to 2° C and achieve zero net CO2 and other GHG emissions by the end of the century.

One of our goals is to provide competitive energy services based on the implementation of low-carbon solutions, thereby ensuring sustainable economic growth. To achieve this, we believe it is necessary to meet the following conditions:

Climate change is largely caused by high levels of carbon dioxide (CO2), which is generated by the combustion of fossil fuels (coal, oil, natural gas…), as it is a greenhouse gas. It is thus an important variable in the implementation of the company’s activities, particularly electricity generation, and therefore reducing this climate change effect is a crucial aspect of the Group’s global strategy. As part of this global strategy, EDP Spain has joined the fight against climate change by focusing on two different fronts: mitigation of, and adaptation to, climate change.

As for mitigation, generation facilities have been transformed in recent years with the implementation of combined cycles, whose specific CO2 emissions are about one third of those in a coal-fired power plant.

Another initiative for the mitigation of global emissions is the ongoing collaboration with the steel industry (ArcelorMittal) both at the Aboño thermal station and the Sidergas cogeneration plant. Both facilities recover waste steel gases resulting from the production of steel, which due to their toxic nature cannot be expelled directly into the atmosphere.

What is the role of the steel industry in the energy production cycle? EDP Spain has joined the global effort to reduce CO2 emissions through Clean Development Mechanism projects (CDM) - in other words, projects that are implemented in developing countries to reduce GHG emissions and obtain, in exchange for these reductions, credits that are used to achieve CO2 emission targets.

As for adaptation, EDP Spain has identified, through the Clim-EDP project, the potential risks to which the company’s facilities are exposed as a result of adverse weather conditions resulting from climate change. These risks are listed and periodically updated in the Group’s Risk Portal, a tool for the management and minimization of corporate risks across the EDP universe; moreover, it provides management benchmarking and control of the risks identified with the equivalent departments of other companies within the Group, streamlining the adoption of the best practices.

The carbon footprint quantifies the amount of greenhouse gas (GHG) emissions that are released into the atmosphere as a result of the development of any activity. It can be calculated for an organization, product, work or service.

By calculating the carbon footprint, all sources of GHG emissions are identified, thus enabling the identification of critical points, which allows for the definition of more effective reduction targets.

In the calculation of the carbon footprint it is important to define the scope. There are three types of scopes: 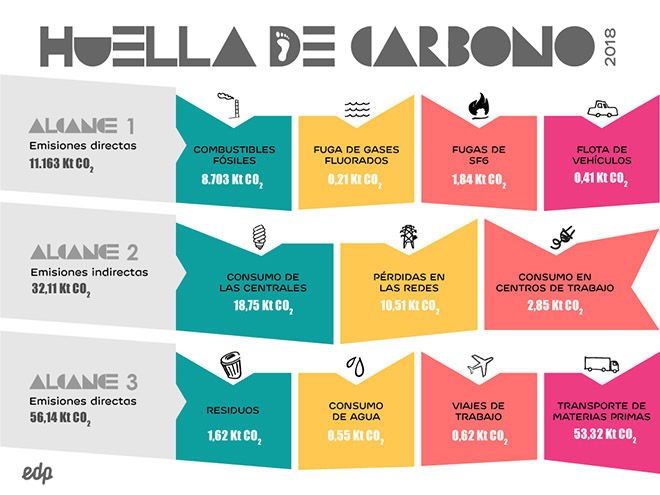